A Palace on Wheels journey is one that remains with you long after the experience itself. The Maharaja way of royal living can awesomely be yours, now at only $3850. And remember, every minute you spend after reading this and not making a booking, you stand the risk of not getting the reservation in time! Rediscover the Romance of Royal Rajasthan aboard India's first and most revered luxury trains.

India's capital city, Delhi depicts the myriad colours of different kinds of lifestyles that are a mix of contemporary and traditional sensibilities. It is a reservoir of cultures, traditions and politics. A visit to its several architectural masterpieces of ancient and medieval times, is always a delight.

Founded in 1727 and the former capital of the Kachwaha rulers, Jaipur today is a versatile tourist destination. Famed as the 'Pink City', this capital city of Rajasthan boasts of a rich historical past that is depicted in its forts, palaces, havelis and its colourful bazaars.

Sawai Madhopur is a beautiful city of Rajasthan, which is extremely popular for housing the world-renowned Ranthambore National Park. The UNESCO World Heritage Site of the historic Ranthambore Fort is an added attraction. It was a planned city that was founded by Maharaja Sawai Madho Singh I of Jaipur.

Chittorgarh Popular for the tales of valour and romance of its erstwhile royalty, Chittorgarh was the former capital of the Sisodia clan of Mewar. Placed on the banks of rivers Gambhiri and Berach, this city has magnificent forts, ruined castles and glorious royal structures. Chittorgarh has a total of 7 huge entries.

Also known as the 'City of Lakes' Udaipur is called Rajasthan's most romantic city because of its picturesque setting, Rajputana palaces and lakes. The erstwhile capital of the Mewar kingdom, Udaipur was founded in 1553 by Maharana Udai Singh II. The city boasts of innumerable tourist attractions.

Nicknamed as the Golden City, the city of Jaisalmer is very well-known for its Jaisalmer fort. This city has been named after Maharawal Jaisal Singh, a Rajput ruler who had established the city in 1156 AD. The city every year hosts its annual Dessert Festival, which is a major crowd puller.

Also known as the 'Sun City' and the 'Blue City', Jodhpur was the erstwhile capital city of the kingdom of Marwar. Now a popular tourist destination, this city is quite famous for its proximity to the Thar desert and for its magnificent forts. It is dotted with innumerable attractions, worth visiting.

Situated on the banks of river Yamuna, the Mughal city of Agra also finds its mention in the Hindu epic of Mahabharat. The city houses 3 UNESCO World Heritage Sites, including the Taj Mahal, one of the Seven Wonders of the World. The city is a blend of the old and the new worlds.

Arrival in the Safdarjung Railway Station. 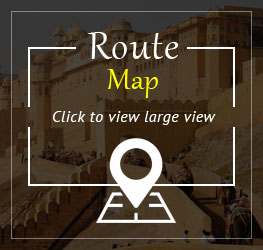 (Per Person per Journey)

(Per Person per Journey)


The Palace on Wheels has been rated 4.5/5 based on 19 customer reviews on the website of Indian Luxury Trains.

Find the details of Palace on Wheels scedule for the season 2021-22 mentioned below.

Jaipur the largest city of Rajasthan is an epitome of vibrancy and magnificence. The royal legacy of Jaipur is rich in culture, heritage and architecture. The city is rightly titled as the 'Pink City' for the color of the stone used extensively for construction within the walled city. Jaipur with its majestic palaces, splendid fortresses, beautiful havelis and tranquil temples make for an idyllic tourist destination. The tranquility of lush gardens housing these intimidating forts and palaces further add to the landscapic beauty of Jaipur.

The erstwhile abode of the 3 most influential dynasties of the medieval world, Agra is worth visiting. The world famous Taj Mahal is the epitome of eternal love and the finest specimen of the amazing Mughal style of architecture. Apart from this, there are numerous other Mughal structures in Agra that are unique and reflect the taste and talent of the Mughals. Fatehpur Sikri and Sikandra are also worth a visit as these also encompass the unique Mughal architectural style. Apart from the monuments, the colorful markets, selling beautiful artifacts, overwhelm the visitors.

Jodhpur is the bestowed with the title of 'The Sun City' as the sun shines almost every day of the year. Situated on the edges of the Thar Desert, it is mostly referred to as the Gateway to Thar. Being the second largest city of Rajasthan the city is divided into two parts- the old city and the new city. The major tourist attractions of Jodhpur include Jaswant Thada, Mehrangarh Fort and Umaid Bhavan Palace. The other major attractions that easily draw the eyes of tourists include Kailana Lake, Balsamand Lake and the Mahamandir temple.

The lake city of Udaipur, once the princely state of Mewar, is rightly tilted as the 'Venice of the East' and, in reference to Dal Lake of Kashmir, it has earned the title 'Kashmir of Rajasthan'. Situated in the mid of lush hills of Aravali along the turquoise waters of Pichola Lake, the stunning landscapes and mesmerizing architecture of the city make it a must-visit destination not only for Indians but also for visitors to India. The major highlights of the city include visit to City Palace, Pratap Memorial and the Saheliyon-Ki-Bari. Besides this the other attractions to savor while being in Udaipur include Jagmandir.

Chittorgarh, previously known as Chitrakut, signifies the gallant story of the beautiful princess Rani Padmini. The rustic town of Chittorgarh showcases love, beauty, bravery and grace at the same time. Legends suggest that Rani Padmini was the reason why Sultan Alauddin Khilji conquered the kingdom of Chittorgarh. Tourists to Chittorgarh are fascinated by its formidable past and the presence of the historic monuments including ruined castles, impressive forts and magnificent royal buildings.

Jaislamer is titled as the 'Golden City of India' for its yellow sandstone structures. The city is widely known amongst tourists for its close proximity to Thar Desert. The city is best known for its old mansions better known as havelis. The dominant highlight of the city is the Jaisalmer Fort, locally known as Sonar Quila. Unlike most of the forts in India, the Fort of Jaisalmer is a living fort featuring shops, havelis and hotels inside the premises of the fort. Of the major tourist attractions of Jaisalmer include medieval Havelis, of which Nathmal ji ki Haveli and Salim ji ki Haveli are the most popular.

Sawai Madhopur is renowned due to its historic opulence. The Ranthambore Fort and the Ranthambore National Park make this Sawai Madhopur a sought-after destination in India. The national park is the best option to spot tigers, performing their natural activities, as about 34 adult tigers and 14 tiger cubs were spotted according to the survey of 2008. Apart from this, the national park is a favorite destination of ornithologists, where they get to spot 300 species beautiful native as well as migratory birds. The national park is adorned with chirping birds and is the perfect retreat for the nature lovers. 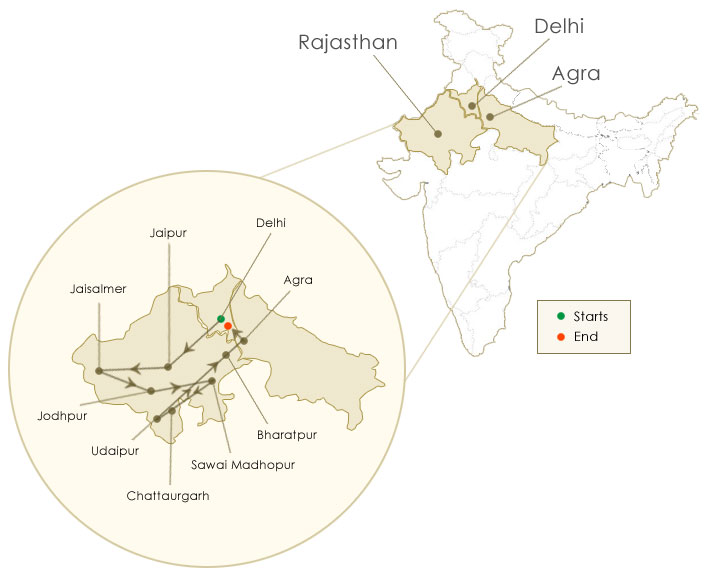